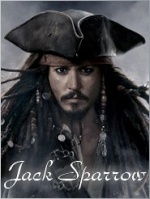 Feuille de personnage
Grade: 3
keyboard_arrow_down
The merchant place of the Radiant Garden world was silent and empty. All the shops were closed and there was just no one passing by, not a single little noise. Suddenly, someone opened a door of one of the houses at the place. Then, a dirty and weird pirate went out of this house. There was no one around to see Captain Jack Sparrow, but he really looked very disappointed. Two days ago, he travelled across space, among worlds and universes, so as to head to the Radiant Garden, in which was supposed to be hidden a very rare treasure map. Then, the Captain went in many houses and silently seeked the map, trying to not be discovered by other people from this world. The more he looked for this map, the more he thought it just didn't exist, and was no more than one of thoses stupid legends shared among pirates.

- I miss a rhum bottle so I can forget my blues...

And there wasn't an open shop to calm his thirst. Furthermore, the only kind of drink sold here was fruit juices, in this stupid shop held by this strange old duck... Sparrow used to try those ice cream that were the pride of the duck, but he just couldn't handle it... The taste was so disgusting.
le Sam 19 Déc 2009 - 17:27
more_horiz
ShivaMembre

Feuille de personnage
Grade: 1
keyboard_arrow_down
There was simply no reason for the Ice Queen to come here. Nobody to meet. Nothing to get. It was a strange decision from her personality which hasn’t the habit to go somewhere for the pleasure to discover the huge universe. And what was she doing? She sat on a chair two hours earlier and since that, she hasn’t moved. It was as she was waiting for something would happen or for someone. But nothing has happened for some hours. She was just alone on this place in this “Radiant Garden”, and it was late. The time had never had a real importance in her life. Of course, she knew that humans was

the night and living the day and for this reason, she had the obligation to consider the passing time and the special moments of the day. She was also beginning to understand that humans hated being disturbed for the dinner. But let’s forget it. A man with boots and hat, long dark hair and dirty skin was walking on the street and staggering a little. He came in a house and went out three minutes later to come in the next one.

-What the hell is this “Pirate” doing?

He didn’t seem to notice her and he continued to excavate each house of the place. When he began to despair, he stopped it and went to a shop to buy an ice-cream. Then he came out looking disappointed. Would he have preferred another sort of drink ?

-Yoho Yoho! And what sort of pirate doesn’t have boat and rob the citizens of this small... small... world.